SUMMARY Art, craft, and the spirit of Japan

Canada Goose is a function first, highly technical brand that offers extreme protection from the planet’s harshest climates. While this offering has served them and humanity well for the past 60 years, the company wanted help establishing itself as the leader in all condition outerwear among consumers. To help raise awareness, they enlisted the help of monopo who created a full 360-degree, multi-sensory campaign inspired by Japan and the nation’s spiritual connection to its elements.

Although Canada Goose is well known all over the world as the leader in extreme weather protection, it is a new player on the scene when it comes to the spring season fashion. As a temperate climate brand, awareness is low. The market is currently seeing a shift in perceptions and consumer behavior as the line between fashion and function becomes more blurred.This territory of cross-pollination between fashion and function is Canada Goose’s opportunity to stake their claim, and take their rightful position in the minds of consumers as the undisputed leader in all-season, all-condition outerwear.The question was: How do we communicate this mission and new position to a wider customer base and the world at large? 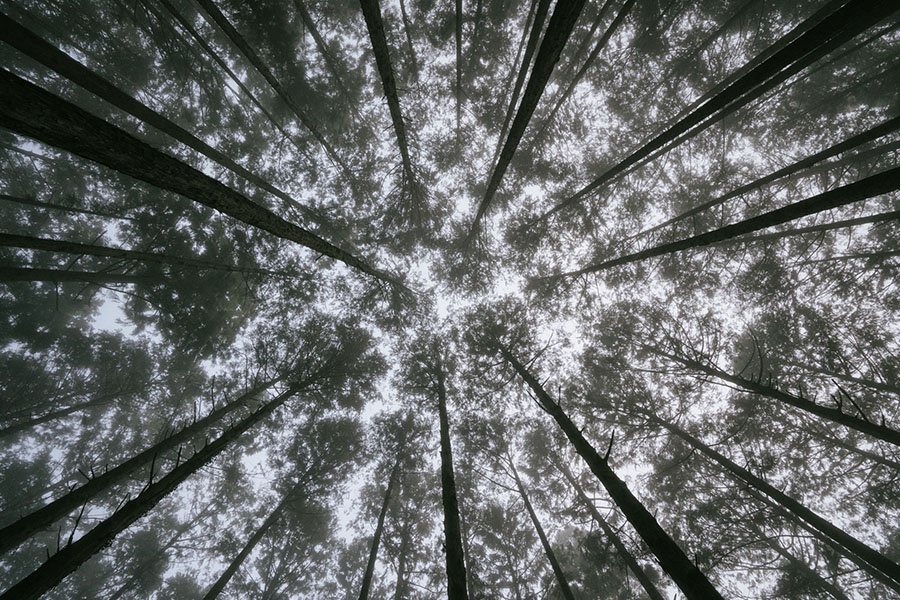 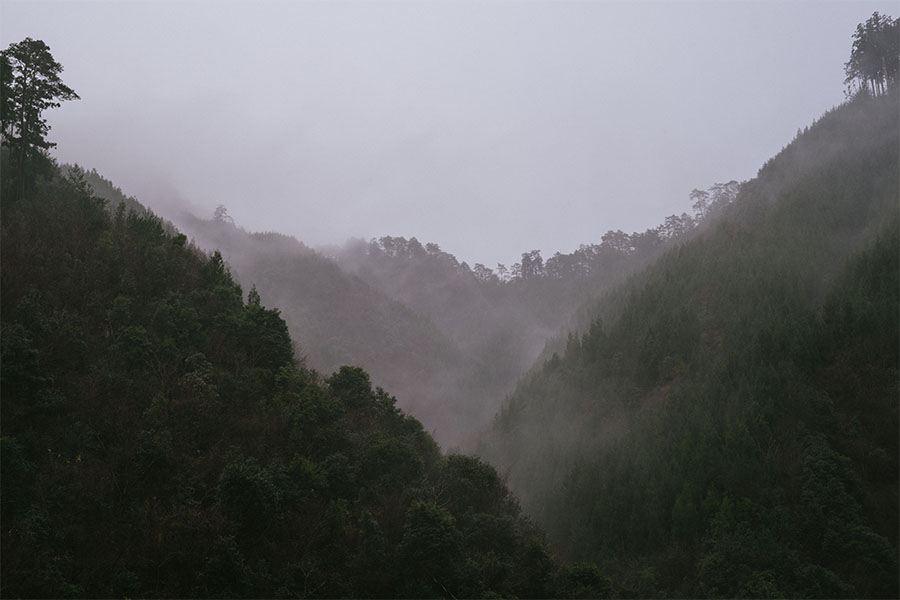 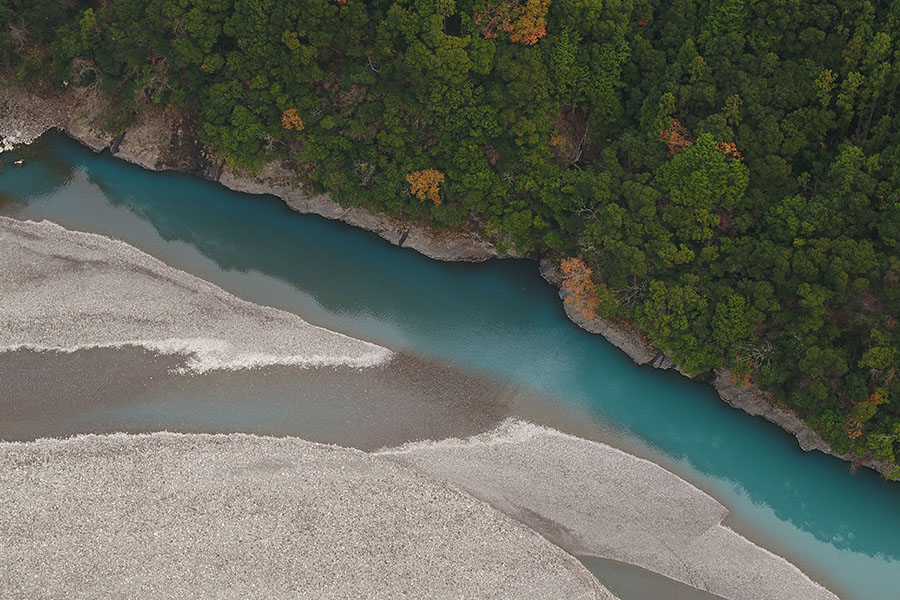 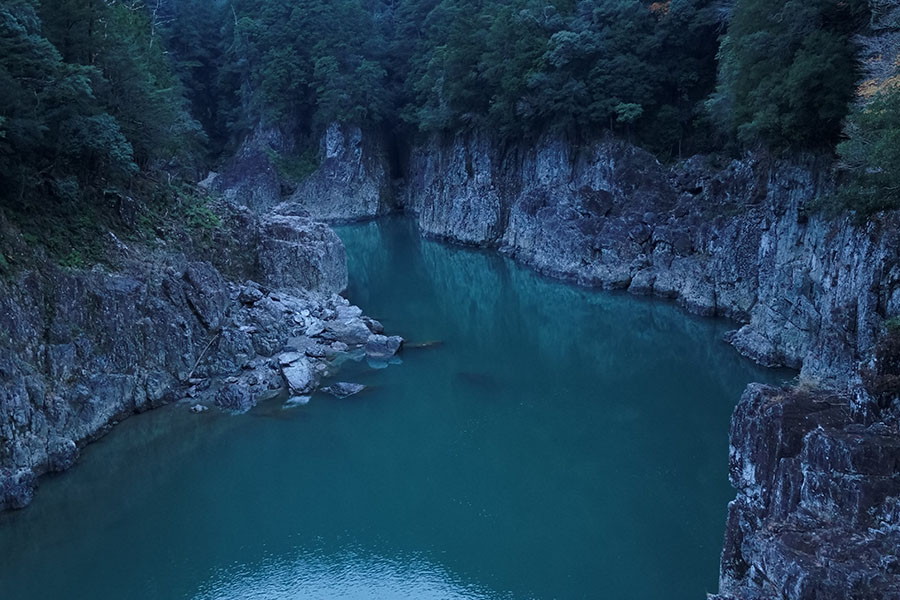 INSIGHTS A Celebration of Rain

The appetite for Canada Goose products in Asian markets is growing at an exponential rate, particularly in fashion-conscious nations like Japan and China. To satisfy this demand, Canada Goose partnered with GORE-TEX to launch the 'Nomad' line which celebrates and embraces the unpredictability of spring rain. Born in Japan and inspired by the nation's rich culture, the campaign functions as a love letter to its people. We collaborated with two Japanese artists, acoustic designer Kouichi Okamoto and calligraphy artist Aoi Yamaguchi, to bring authenticity to the product by telling real stories of real people. The campaign is a celebration of rain, its life-giving properties and how it has inspired art and creation throughout Japan's history. By marrying the cutting-edge technology of the products with the symbolic relationship Japanese culture has with the outdoors —spring rain specifically, our goal was to achieve function-first positioning in the minds of the consumers. 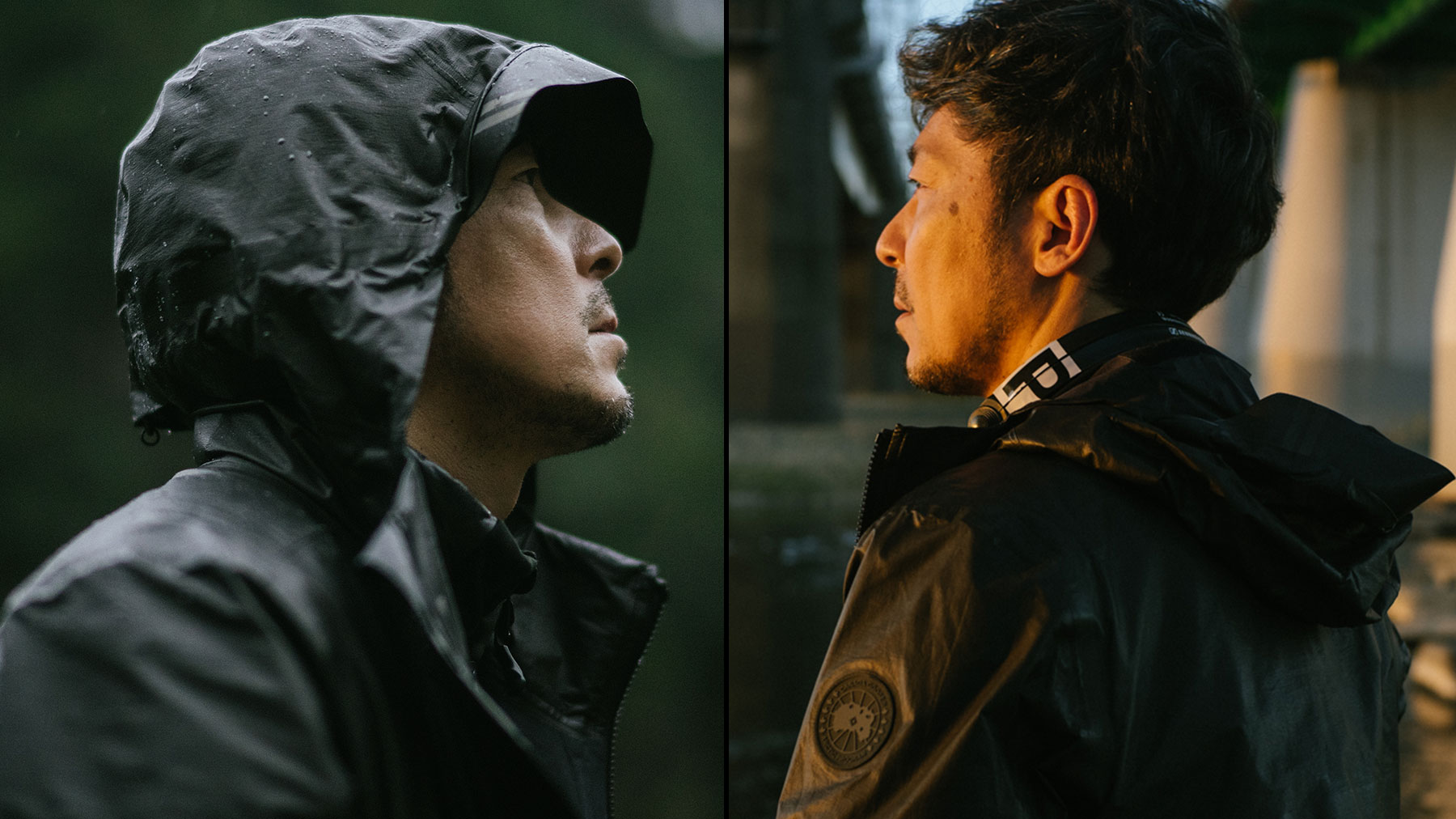 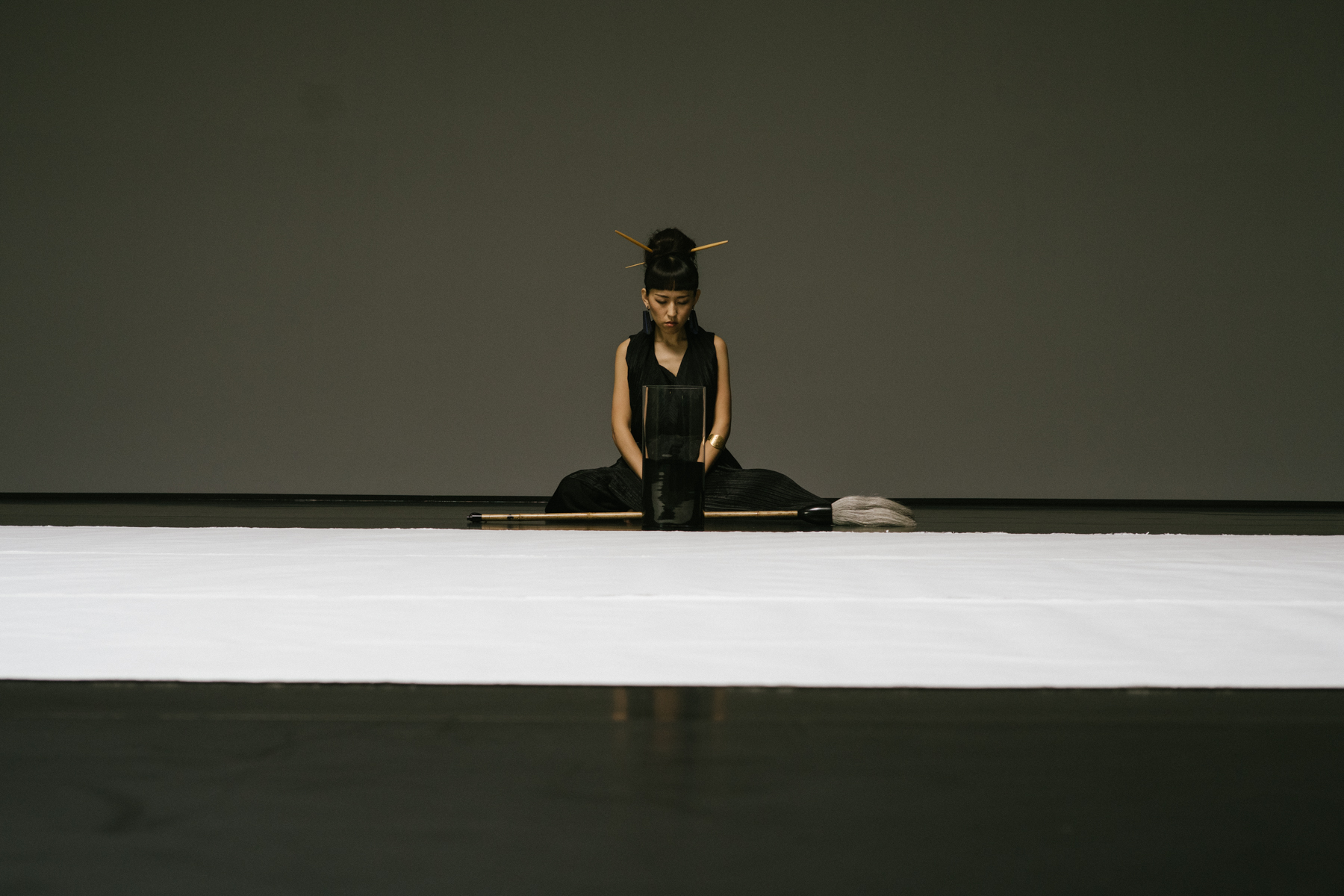 “Rain is one of the familiar phenomena that is felt by all the body’s senses” muses Okamoto in the film. To do justice to rain's sense-engulfing qualities, we crafted a multi-sensory 360 campaign experience in line with Okamoto-san’s words. Through film, music, imagery, scent, retail theater, and art installation, we showcased the unparalleled technical and functional prowess of Canada Goose while allowing the world the opportunity to see, feel, smell, move and interact with every aspect of the brand experience. The outcome? A truly immersive celebration of nature, art, and the human condition.

KOUICHI OKAMOTO - Acoustic Artist Okamoto is a product designer and sound producer who has been releasing his sounds on the Dutch techno label “X-Trax” since 1997. In 2006, alongside co-conspirators Ayako Nakanishi and Yuichi Yamaguchi he founded Kyouei Design, a design and manufacturing company which specializes in crafting groundbreaking experiential works. His creations have been exhibited in Japan and abroad (SF MoMA, Brazil, Israel, V&A Museum) Okamoto makes art out of the sound of rain, creating a symphony of noise that harmonizes with nature. Born and raised in Japan, Okamoto says everything he does is 'shaped by the tradition of minimalism and simplicity.' The sound piece he created for this project was captured on location during the shoot in Wakayama, one of the rainiest corners of Japan. AOI YAMAGUCHI - Calligraphy Artist Aoi Yamaguchi began her calligraphy career at age 6, training under the watchful eye of master Zuiho Sato. Her works juxtapose traditional Eastern classical culture with contemporary artistic expressions. Through her performances, Yamaguchi transforms the two-dimensional art of Japanese calligraphy into an entirely full-body physical manifestation. For this project, she created two large-scale Japanese characters, which together represent “spring rain.” She was inspired by "the long rainy days in the early spring air: long-lasting but not relentless, gentle." Through wide, open strokes, Yamaguchi translated the essence of spring rain into her calligraphy; she explains, “I wanted to symbolize the raindrops of regeneration falling gently straight from the sky.” 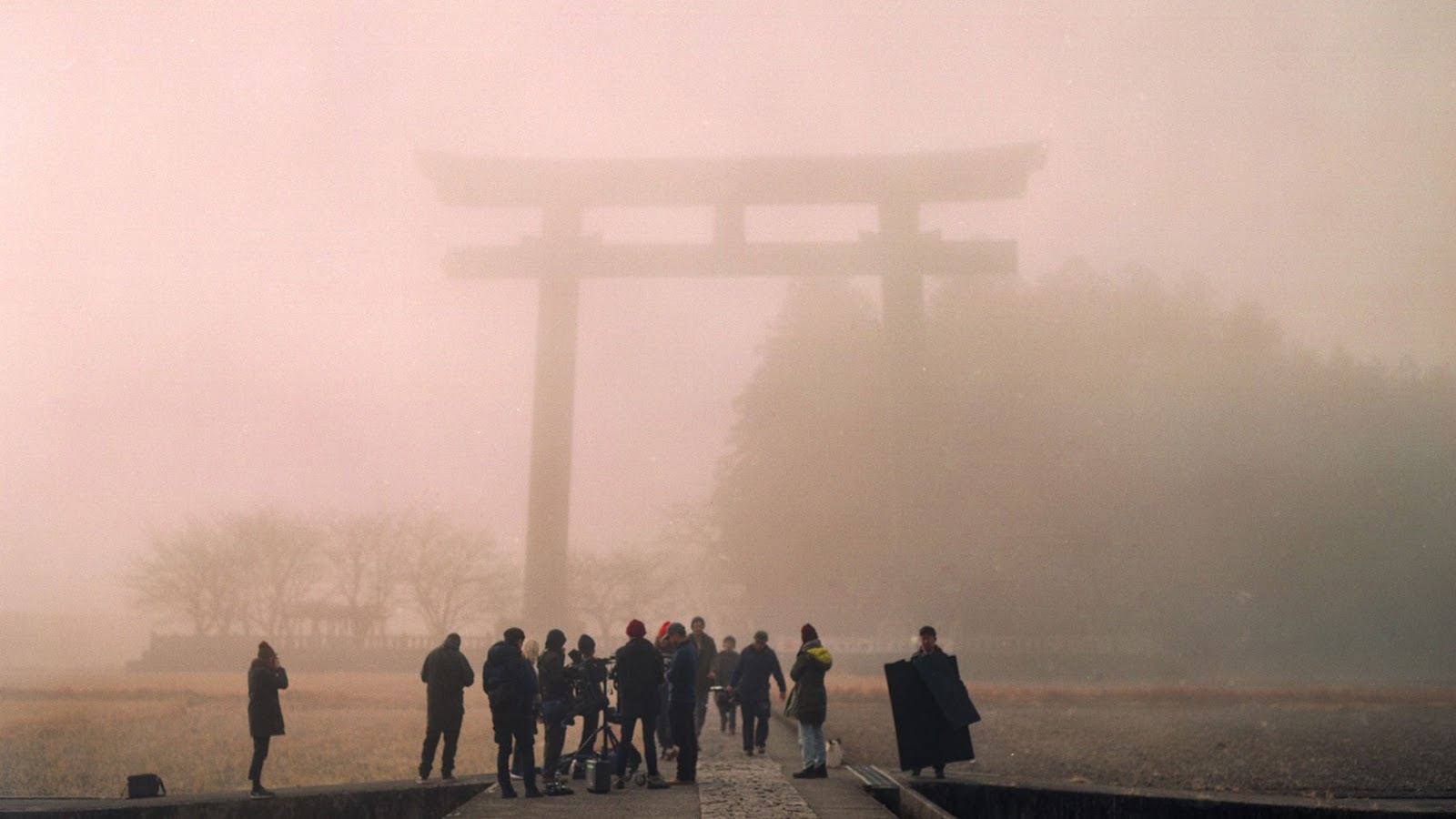 We shot the film in Wakayama prefecture with sound and product designer, artist, and music producer Kouichi Okamoto and on the streets of Tokyo with calligraphy artist Aoi Yamaguchi. The film tells the story of two unique artists inspired by the rain and its three core elements: Atmosphere, earth, and water. We traveled across the ancient pilgrimage route of Kumano Kodo, where for over millennia people from across the world have made the arduous journey. Sound designer Kouichi Okamoto hunted and gathered the aural manifestation of the elements, capturing the essence of rain in its purest form. Meanwhile, calligraphy artist Aoi Yamaguchi traversed the dense urban jungle of Tokyo. Drawing inspiration from her surroundings she crafts her shodo performance, an act deeply rooted in nature and inspired by the seasons. Her performance scenes were shot in studio with an elaborate rain system custom fitted for the occasion. 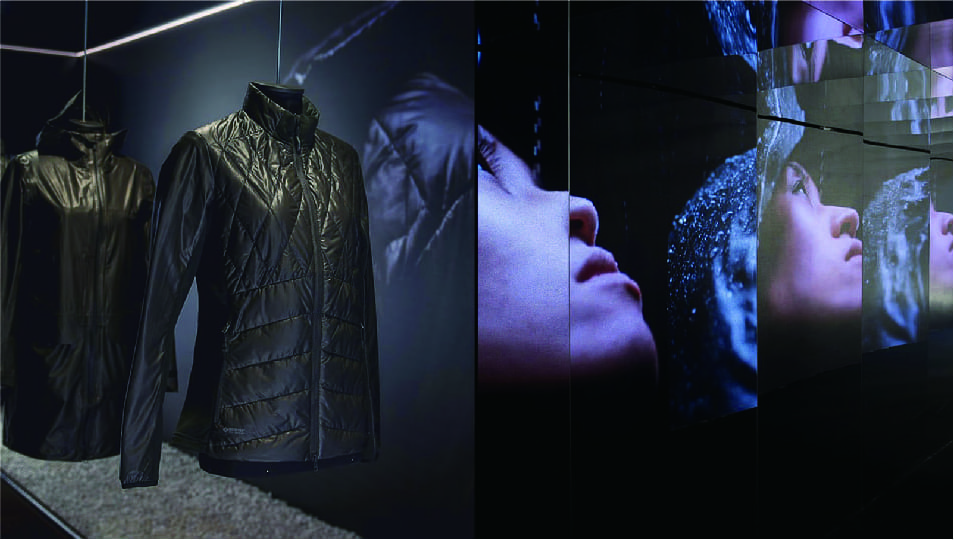 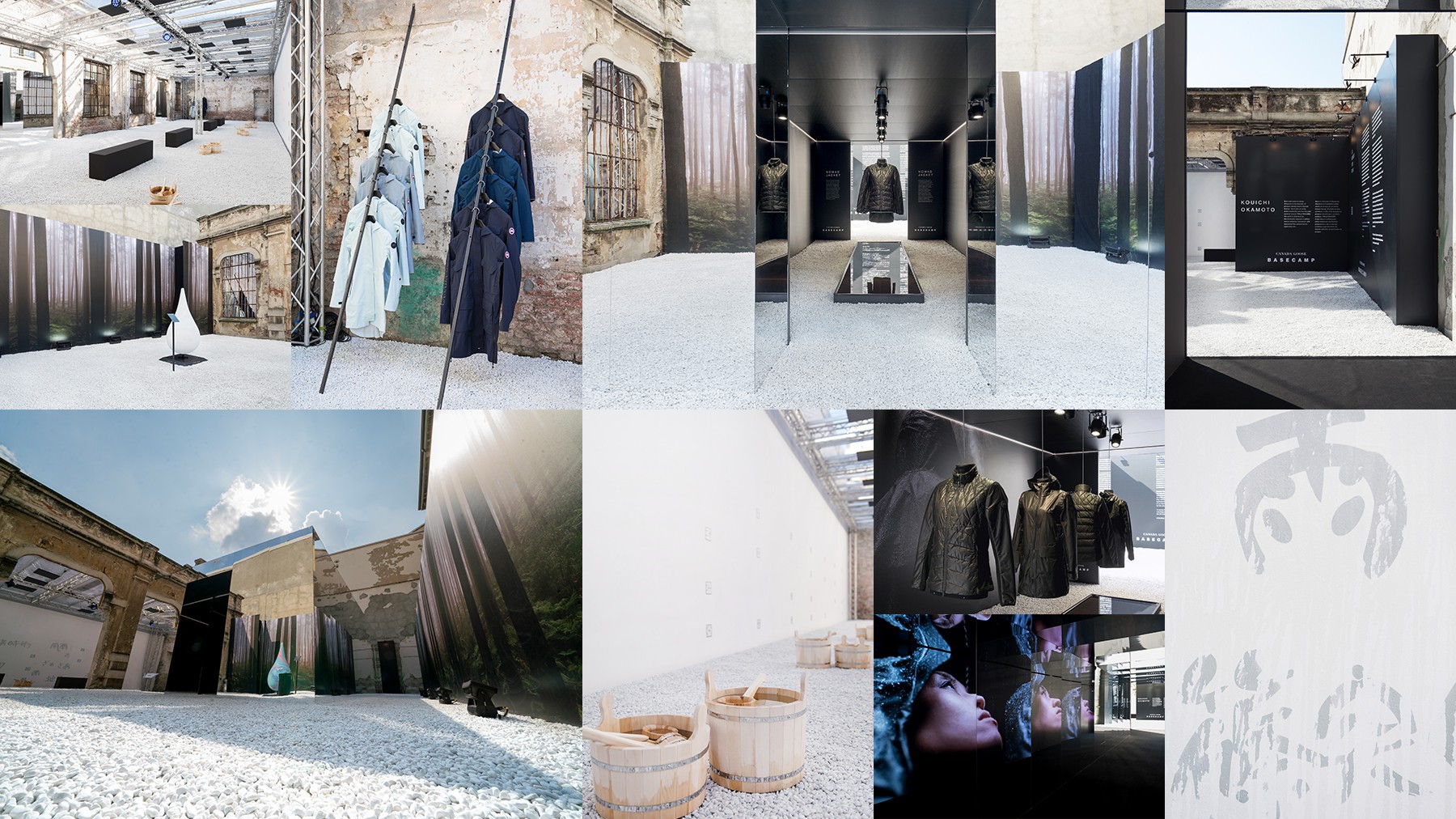 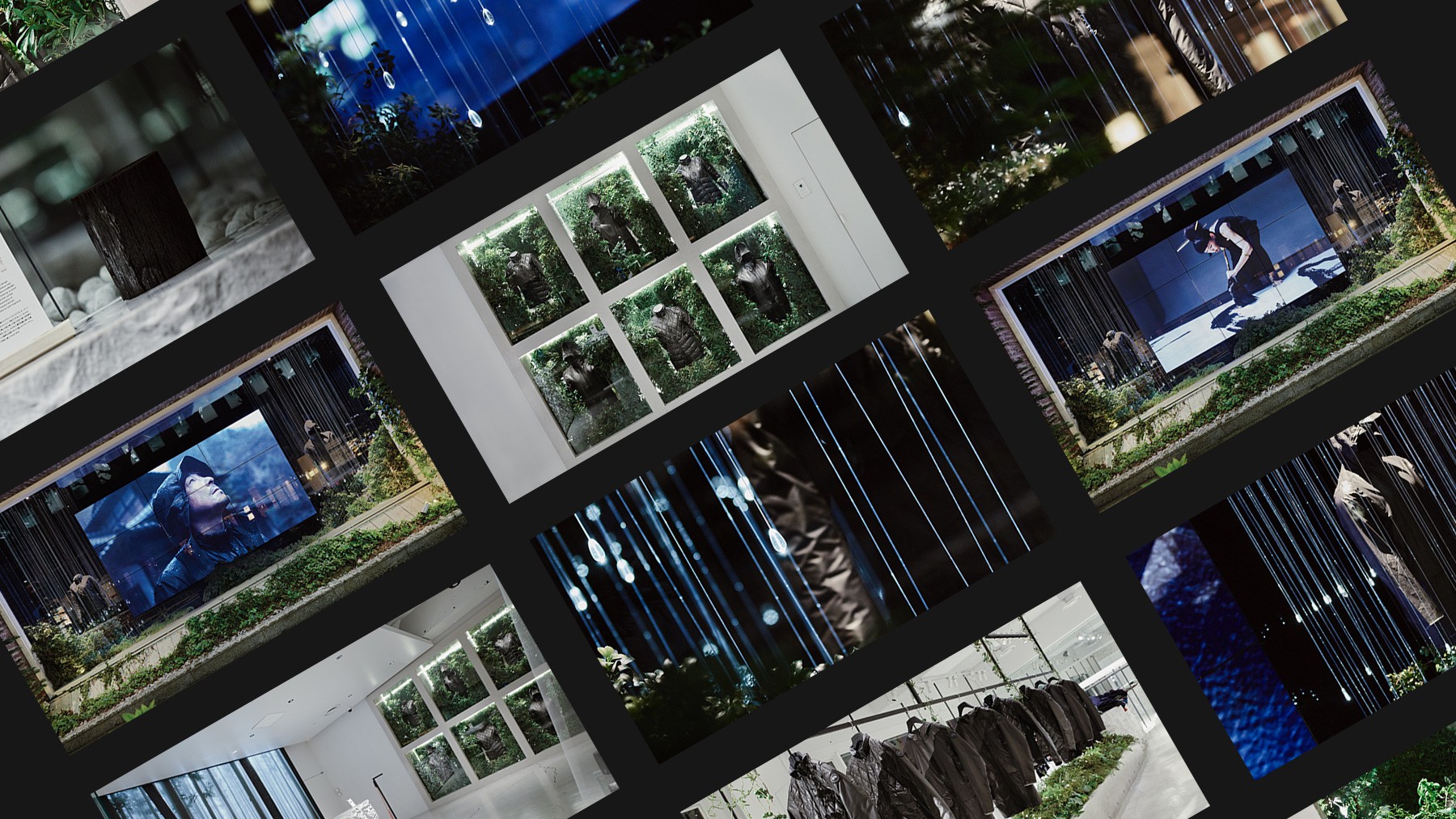 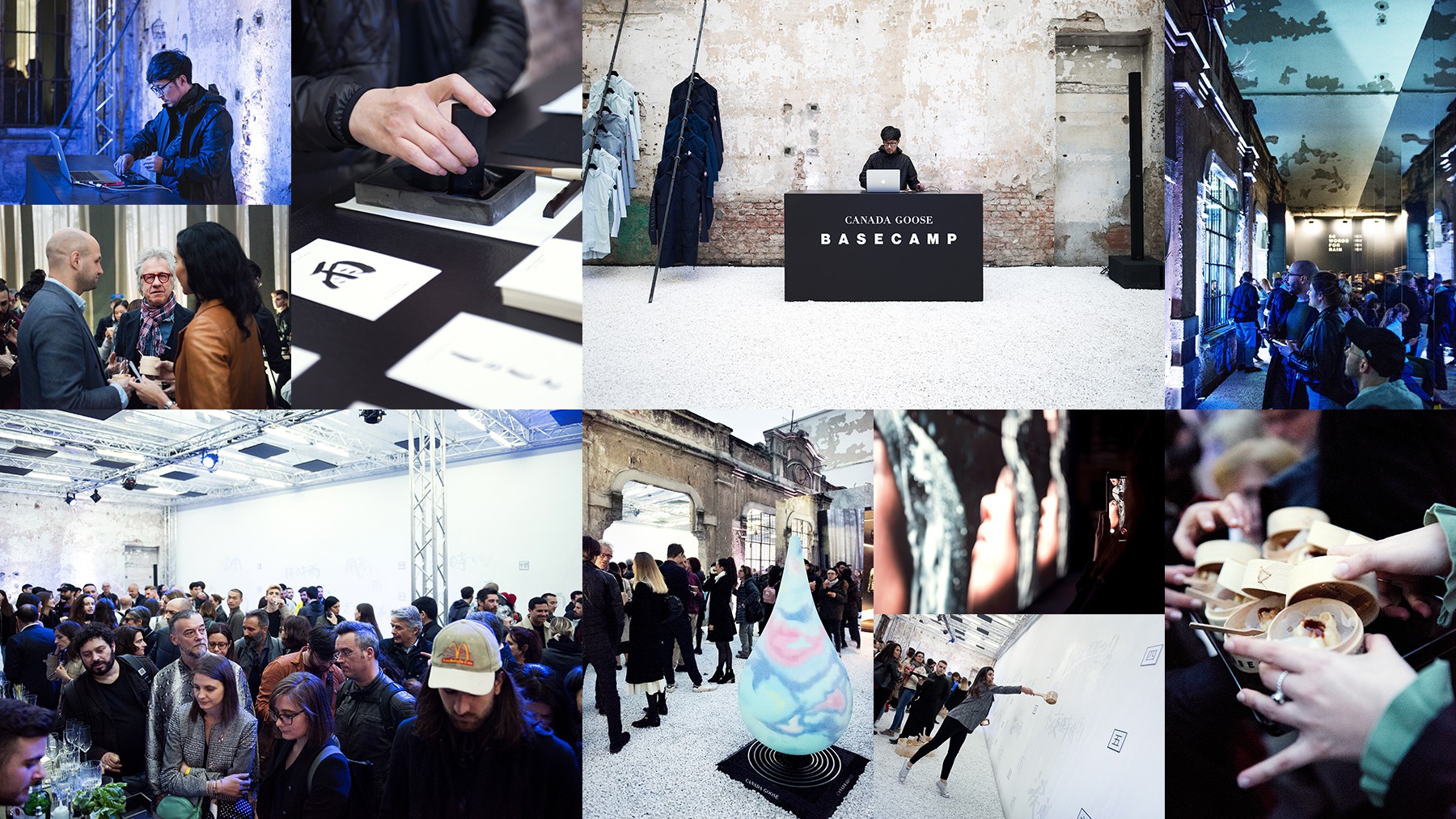 We transformed the retail interior of the Canada Goose Sendagaya flagship store to spotlight and feature the GORE-TEX Nomad Capsule Collection as a commissioned artwork.Elements of the retail theater focused on the senses to bring attention to the subtle characteristics of rain, spring, and the lush forestry of Wakayama. A global collaborative effort by Japanese, American, and European artists, the installation was comprised of a collection of carefully considered pieces. The botanical window displays and room scents were inspired by the lush forests of Wakayama, which unified with the aural backdrop composed by Okamoto. An oversized lightbox image and the film were displayed on a four-meter screen for passersby to see. The entire retail theater experience was designed to function as an art gallery with artist name cards placed throughout the space explaining each artists’ unique contribution to the project. The result was a full multi-sensory experience for visitors where they could feel the essence of Japan and the campaign as a whole. 50 Words for Rain at Milan Design Week The Japanese language has over 50 words for rain. This cultural idiosyncrasy was the inspiration for us to explore the themes of sound, rain, ink, and Japanese culture. To further our exploration of Japan’s relationship with rainfall, we created an immersive installation at Milan Design Week in close collaboration with Okamoto. Taking over the courtyard of a 19th-century building in the heart of Zone Tortona, the immersive installation invited visitors to immerse themselves in a fully interactive experience. The visitors were led through a mirror tunnel of three-meter LCD screens looping the Nomad hero film before arriving in the courtyard to the sounds of a bespoke rain inspired set created by Okamoto for the occasion. Dotted throughout the space were wooden buckets filled with water for guests to throw at the wall to reveal various Japanese kanji hidden beneath layers of hydrochromatic ink. Using a web AR app we programmed and designed, the guests could have the wet kanji revealed by putting their phone screens up to the wall. The event was a resounding success attracting over 1500 guests and got picked up by various local and international media.